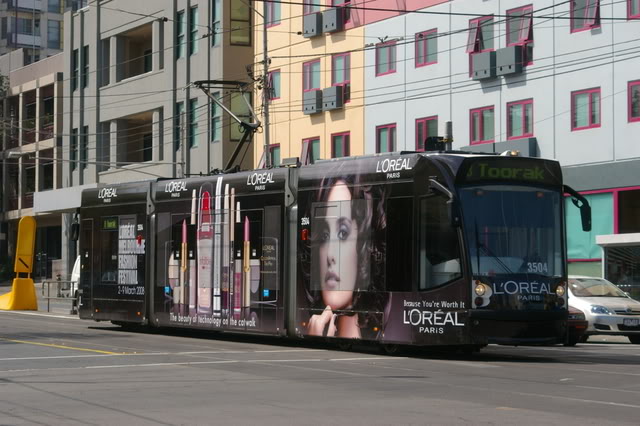 Within the infrastructure of Melbourne, lies the largest tram network in the world. Trams are a widely used medium of transportation between commuters in Melbourne. The tram system and infrastructure of the Tram network proves a prominent façade in the integration of portraying Melbourne as a living city. Melbourne’s tram network is based on standard gauge tracks and powered by overhead wires. The infrastructure and rolling stock is owned by the Victorian Government and operated under contract; the current private operator being KDR Melbourne, operating as Yarra Trams*

Trams are a distinctive assimilation into Melbourne’s culture and character; hence, the trams are bombarded with tourism and advertising features. This particular tram was shot on Swanston St, with a large advertisement wrapped around the entire tram, for L’OREAL. This was in conjunction with L’OREAL Melbourne Fashion Week (LMFW), which they sponsor. The LMFW is held within the city as well, supported by various other forms of advertising i.e. banners, posters, flags etc…
It has long been known that advertisers utilise as much of outdoor media as they can to reach out to consumers, but how oftern do the messages really hit their intended audience? In this case study, Trams are a local icon in Melbourne, with millions of users each year commuting across the city. What better way to reach and strengthen your message then with a giant mobile billboard.

Note: Just make sure that the creative is worth remembering and is just as impactful as this mega tonne moving behemoth.